5-Spice Beef Brisket (with an egg on top) 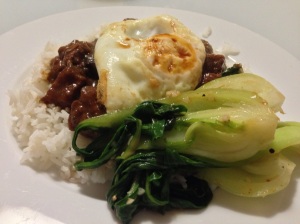 Thinking back to an pre-adult food craving this one always comes to mind. And it has stood the test of time. It was first served up by my mother and when she passed this recipe on to me many years ago this must have been the dish that kick-started my foray into home-based, do it yourself culinary experimentation. So it seems perfectly apt that my first blog entry should be this oriental inspired 5-spice fork tender beef brisket with an egg on top.

I’ve taken the recipe that she gave me and honed it over time and although I daren’t ever say its better than hers… in a competition scenario it would run extremely close.

If you go to a decent Chinese restaurant, and by that I mean, an authentic Chinese restaurant… not an all you can eat buffet where Brits gorge themselves on copious amounts of chicken chow mein, ‘sea-weed’, prawn toast and chips, and if you’re really lucky maybe some sushi rolls to mix things up a bit, which I must add, is something that really bothers me. What’s the deal with the British and their love for horrendous westernised Chinese food? Anyway, I digress. Maybe I can write about this in more detail at a later date. This dish can be found, albeit on ‘the Chinese menu’ (which if you don’t happen to be Chinese, you have to ask for this nicely or they won’t give it to you) at most good Chinese restaurants although their approach is somewhat different in that they tend to boil the brisket prior to sealing it which I think compromises the tenderisation process that takes place in the slow cooker. It also makes the meat look a bit grey. They tend to leave a lot if not all of the fat on, plus some of the connective tissue, which you could argue adds to flavour but is not to everyone’s taste. At least eating pure animal fat isn’t really to my taste. So this dish will discard the aforementioned.

I’ve experimented with too many aspects to mention: to sear or not to sear? Overnight marinating… slow-cooker, oven or rice cooker slow cook function? Shin rather than brisket… I’ve tried many combinations. But I’m quietly confident I’ve found a definitive combination that also turns out to be the simplest, which more often than not, comes as no surprise.

I think the dish works best in a slow cooker but if you don’t have one, using a heavy based pan with the lid on a low heat will also yield excellent results. I’ve learned that getting the searing process right is really important in that it brings out the flavour of the beef. Like I said, I’ve tried doing cooking the beef in the slow cooker from raw but I found that the beef came out somewhat gloopy. Also in terms of cooking time, it needs minimum three hours, but I think six in a slow cooker is ideal. I’ve cooked this for as long as 24 hours in the past, but I found the beef breaks up to much and became more of a beef meat sauce.

It goes without saying that using the best beef you can find will work wonders in this dish. I’ve always thought that getting hold of great tasting, ‘beefy’ tasting beef is actually quite hard to find in the UK and something that isn’t really talked about enough; and by ‘beefy’ I mean aged beef with yellow coloured fat and abundant depth of flavour which you tend to find by default outside of the UK. I’ve learned that this is down to our BSE legacy, which the UK still hasn’t managed to shrug off, ultimately resulting in stricter legislation involving slaughtering cows at a younger age and slashing hanging times. I avoid supermarket beef in particular because I don’t think it tastes of anything, mainly due to the fact that when the cow reaches the age of lining up for slaughter they are barely out of the veal category. I’m fortunate to live within the vicinity of Gloucester Road in Bristol, which has an abundance of good quality, independent butchers who are supplying all meats far superior to what you can find in a supermarket, competitively priced.

Anyway, to conclude on dish itself: the egg freaks some people out. Don’t be freaked out by the egg because in my opinion cracking the yolk and watching the flow over the beef is probably the reason why I make this in the first place. It tastes great.

1.   Unroll the brisket and lay it out flat. Dice it into small chunks approximately 2-3cm squared. Discard excess fat and any excess connective tissue.

2.   Coat the cut up brisket into a white flour, 5 spice and black pepper mixture.

3.   Once all the brisket is coated, heat up the vegetable oil in a large pan and seal the meat for a couple of minutes on all sides until the beef has a  nice colour. Remove sealed beef from pan and transfer to the slow cooker.

4.   Gently fry off the finely chopped onion for a couple of minutes in the pan used to seal the beef before adding to the beef in the slow cooker.

5.   Whilst the onion is frying, you can add the oyster sauce, soy sauce, cumin, garlic, grated ginger, chopped chili, salt and black pepper to the beef in the slow cooker and give it a good mix. Add the cooked onion.

6.   Cover the beef with pre-boiled (but not boiling) water. You can also add the optional stock cube at this point, if you so wish.

7.   Cook on low for at least 3 hours, or until the beef is fall apart fork tender. When the beef is an hour away from cooking, add some chopped aubergine.